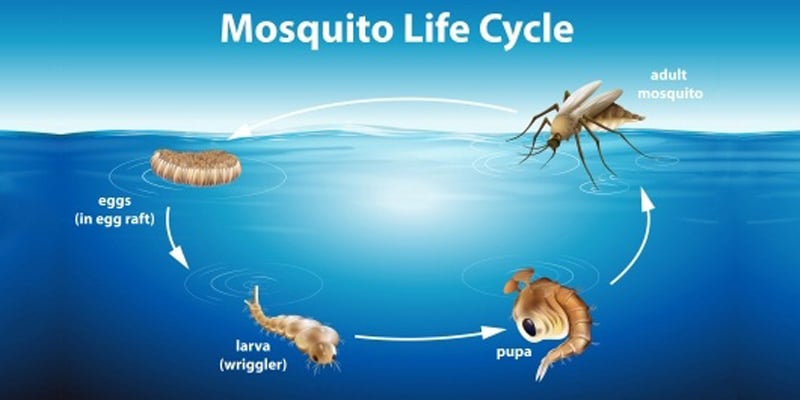 Once eggs come in contact with water, they hatch into larvae within several days. Mosquito larvae undergo four stages of growth and development called instars. Larvae feed on organic material and microorganisms in the water and return to the surface of the water to breathe. Larval development may be as rapid as 5-7 days in warm weather. After the larval stages are complete the larvae shed their skins and emerge as comma-shaped pupae. Pupae are very active and dive vigorously if disturbed. Pupae do not feed while they undergo metamorphosis to the adult stage. The adult mosquito emerges from the pupal skin and rests on the water’s surface until it dries.

Both male and female adult mosquitoes feed on plant nectar, but only the female bites to get the blood needed for the development of eggs. While some kinds of mosquitoes can live several months, the main nuisance mosquitoes we have in this area usually survive four weeks or less. Not all mosquitoes can carry disease, nor are all mosquitoes vicious biters. Some kinds of mosquito never bite humans. Mosquitoes also vary in the distances they travel from the water they developed in. While some species will not stray more than a block or two from their source, other species’ flight range can be 20 miles or more. The great diversity between different species of mosquitoes makes their control more complex, requiring a variety of approaches and methods.